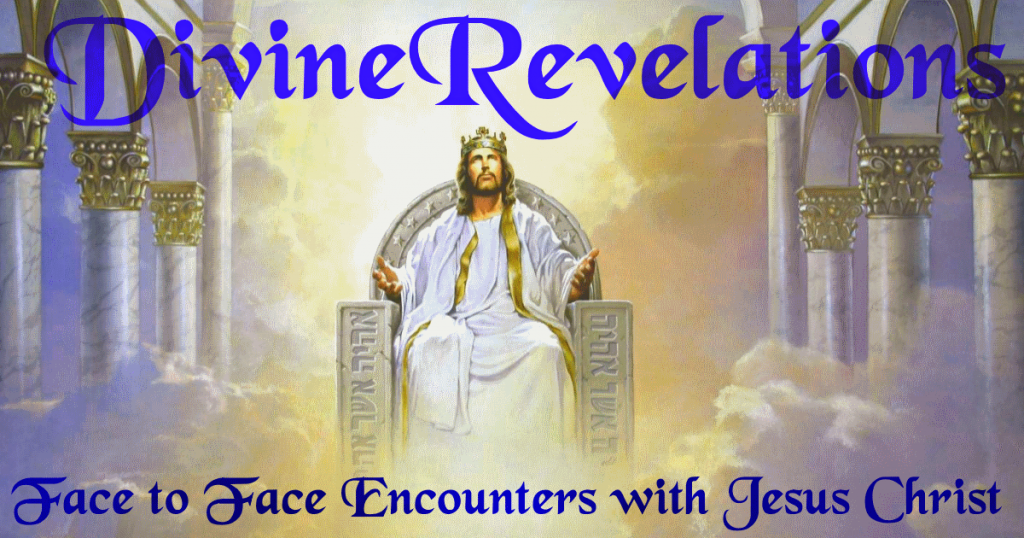 Divine-Revelations is a website I bring to you because it is packed with personal encounters and events that introduce, enhance, and propagate the Kingdom of heaven. Here is an example of what you can see in Divine-Revelations:

The Lazarus Phenomenon: The best version of Heaven and Hell

The Power of Prayer by Dr Cindy Trimm

Revealing Heaven. What Heaven is like? Many amazing details revealed by Kat Kerr

A Divine Revelation of heaven and hell.  Mary K Baxter had a divine revelation of the terror of hell.

How Satan stops our prayers, combat in the heavenly realm

Praying in tongues, how Satan stops Christians from receiving their prayer language.

Deliverance from the power of darkness, the testimony of Emmanuel Eni a former witch doctor in Nigeria

God’s Generals, Great Christian Leaders. Why some succeed, why others fail?

Heaven is real. Great Christian testimonies of persons who have experienced heaven and hell

The Bible vs The Book of Mormon. Testing the book of Mormon against the Bible. Analyzing the geography, archaeology, history and geology of both books.

Jewish Testimonies – Famous Jewish Rabbi and Jewish believers who have had encounters with the Messiah, Christ the anointed one.

Bible Movies – Like The Passion of Christ; The Ten Commandments; In the Beginning; Ruth; The Story of Esther; The Book of Daniel; Jesus; and many other.

I Saw His Glory – by Pastor John Green

The Heavens Opened by Anna Rountree

The Final Quest – A vision by Rick Joyner

Does God Exist – Scientific and Logical Arguments for God

The War on Children – An AGENDA to Sexualize our kids

Getting Into Heaven  – by Pastor Park

Enter The Temple – The Tabernacle of God. Learning the Stations of Solomon’s Temple.

Hell’s Best Kept Secret – Why do 80-90% of those who make decisions for Christ fall away from the faith?

The Call – by Rick Joyner

Ark Of The Covenant Found – It is our belief that Ron Wyatt DID discover the Ark of the Covenant, just as he testified. And that God used him to reveal many of the Biblical archeological finds.

A Glimpse Of Eternity – The amazing story of Ian McCormack.

The Body Of Christ – The vision of the body of Christ and End Time Ministry by Tommy Hick.

Soul Ties – Removing soul ties in 10 minutes. What are soul ties, and how to remove them?

Muslim Journey of Hope – A Muslim encounter with Jesus Christ.

The Gospel – by Eric Ludy

The Alpha Course – Leaning The Fundamentals Of Christianity

Learning The Bible in 24 Hours – With Chuck Missler

The Revival Hymn Video – State of the Christian church.

Fighting on the 7 Mountains – Winning the cultural war…

Introduction To Jesus – A brief introduction to Jesus, who He is, and what He does?

The Atheist Delusion Movie – Why millions deny the obvious!

Science in Scripture – Ten of the top scientific facts in the Bible.

The GOD Story – The story of God, Jesus and the Bible from creation to eternity.

The Truth About Witchcraft – Stories of former witches.

The GAP Theory – Tradition vs Bible – The Age of the Earth.

From Creation to Christ –

The Life Of Jesus – In the Gospel of John

The Case For A Creation – Full Documentary Investigating the Evidences for Jesus.

The Case For Faith – Examining some of the toughest objections to Christianity.

Set Free From All The Abuse – Stories of Former Witches.

End of the Spear – Godly Movies

When Jesus Showed Me HELL – Jesus Allowed me to see hell and warned the world – Hepzibah’s testimony.

Never Commit Suicide – Suicide can lead a person to hell – never do it!

More Than A Dream – Muslim lady gives Jesus one week to show up, and He did!

Fractal Praise – Praising God With The Beauty of Fractal.

Victor Mark Story – When impossible is the only way out.

Avoiding Deadly Mistakes – Deadly mistakes by the people of God.

Declaration Prayer – Declaring God’s will over your life.

The Enemies Within – Could your Congressman pass an FBI security check?